In honor of our 150th anniversary, UW Law School introduced its very own ice cream flavor at our October 19th anniversary kickoff. We asked members of our Law School family to propose the flavors, the mix-ins, and even the name. More than 400 suggestions were submitted.

And the winning flavor is … 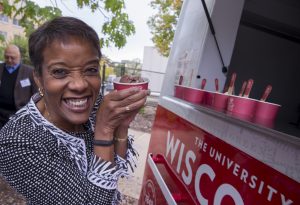 It’s got berries, it’s got a marshmallow swirl in a chocolate base, it’s got Madison. It was obviously meant to be. The name is a play on the name of an important Supreme Court case — Marbury v. Madison — which established the Court’s power to overturn an act of Congress on the grounds that it was unconstitutional. Thank you to all who voted on a name and flavor.

Here are a few of the others submitted: